Shunfeng International Clean Energy Limited today announced its annual results for the full year ended 31 December 2015.
In 2015, revenue increased 22.4% year-on-year to RMB7,032.4 million, primarily due to higher sales of solar products and an increase in revenue from solar power generation. Net profit was RMB58.0 million in 2015 compared to RMB1,304.0 million in 2014. The decline in net profit was primarily due to a reduction in the average selling price of solar products, the impact of electricity restrictions on solar power generation, an increase in distribution and administrative expenses as a result of initiatives to expand operations in international markets, and an increase of foreign exchange losses due to the depreciation of RMB against major currencies.
Financial Highlights 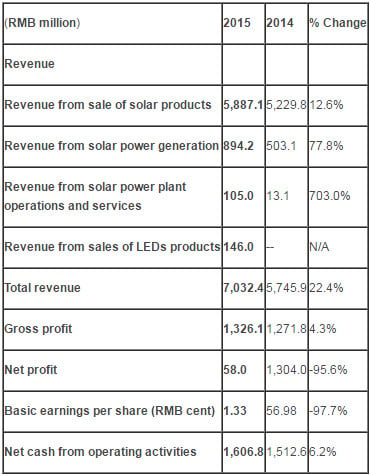 "We are pleased to report revenue growth of 22.4% year-on-year in 2015, which was driven by higher shipments of solar products, and a significant increase in power generated by our portfolio of solar power plants," said Eric Luo, SFCE Executive Director and CEO.
"2015 was a year of ongoing transformation for SFCE as we continued to build our platform of integrated clean energy solutions with the acquisitions of Lattice Power, an LED lighting technology developer and manufacturer, and Suniva, a leading American manufacturer of high-efficiency photovoltaic cells and modules. We also made particularly strong progress in our solar business with greater power generation, despite intermittent restrictions on power generated in certain regions, an increase in power plant operations and monitoring service contracts, and an agreement to sell 9 solar projects to Chongqing Future Investment Co. Ltd. Going forward, we will continue to develop solar projects with a view to transferring them as fixed-income renewable energy products to qualified investors," added Mr. Luo.
Zhang Yi, Chairman of SFCE, commented, "The 2015 United Nations Climate Change Conference in Paris marked a significant turning point in the fight against climate change with 195 participating countries agreeing to reduce carbon output as well as a target to keep global warming to well below 2 degree Celsius. This historic agreement will set the stage for the introduction of more country-specific policies that incentivize the adoption of clean energy solutions and the reduction in carbon emissions. SFCE is well placed to benefit from this irreversible trend and, in the year ahead, we will continue to build on the platform that we have created to deliver more integrated clean energy solutions to enterprises both in China and across the world."
Business Highlights
- Solar Power Plants Business: In December 2015, the Company signed an agreement to sell 100% equity interest in a wholly-owned subsidiary that owns and operates 9 solar projects in China to Chongqing Future Investment Co. Ltd, which marks the ongoing transformation to an asset-light business model. The agreement is subject to certain terms and conditions and is expected to close in 2016.
- Acquisition of US Solar Manufacturer: On 12 August 2015, the Company completed the acquisition of a 63.13% equity interest in Suniva, a leading American manufacturer of high-efficiency, cost competitive PV cells and modules. The acquisition will enable SFCE to expand its presence in the premium US market.
- Solar Power Plant Operations and Services: In November 2015, the Company established a strategic partnership with CGN Europe Energy SAS, a wholly-owned subsidiary of China General Nuclear Power Group, to cooperate on the development of clean energy applications in Europe and other international markets.
- Integrated Low Carbon Solutions Business: The Company successfully completed an integrated clean energy system for Hongqiao Internationals School in Shanghai, which will reduce the school's energy costs in half and reduce its carbon emissions by two-thirds. In 2015, the Company also signed memorandums of understanding with several governments and state-owned enterprises both in China and internationally, including Changzhou, Luoyang, Turpan, Polynesia, to provide integrated clean energy solutions.
- LED Business: In August 2015, the Company completed the acquisition of a 59% equity interest in Lattice Power Corporation, a leader in GaN-on Silicon LED technology, to expand into the LED business and further implement its strategy of developing one-stop clean energy solutions for customers. In January 2016, Lattice Power was awarded first prize by the State Technological Invention Award in China for successfully developing the world's first silicon substrate LED technology.
Solar Product Manufacturing and Sales Business
The Group manufactures and sells solar wafers, cells and modules to customers both in China and international markets. For the year ended 31 December 2015, the sales volume of solar products amounted to 2,282MW, representing a 6.5% increase from 2,144MW for the year ended 31 December in 2014. The Group successfully transitioned to selling a higher proportion of solar modules compared to solar wafers, which somewhat mitigated the reduction in the average selling prices of solar products during the year. Sales of solar modules to independent third parties increased by 90.9% year-over-year to 1,303.8 MW in 2015 from 682.9 MW in 2014.
SFCE also continued to diversify its sales of solar products in 2015. Top 5 customers in 2015 represented approximately 22.6% of total revenue as compared to approximately 27.8% in 2014. In addition, sales to international customers increased to 47.7% of the Group's total revenue in 2015 from 26.1% in 2014. 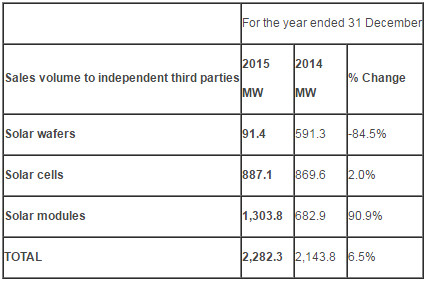 Solar Power Generation Business
The Group develops and operates solar power plants, primarily in China. For the year ended 31 December 2015, solar power generation increased by 67.2% year-on-year to 1,016,312 MWh. The growth was primarily due to an increase in the number of grid-connected solar projects in operation. As of 31 December 2015, the Group's solar power plants successfully realized a total annual designed capacity of 1,780MW of on-grid generation.
Solar Power Project Portfolio

Solar Power Plant Operation and Service Business
The Group acquired S.A.G. Solarstrom AG (S.A.G.), a German solar power enterprise, in the second half of 2014 to enhance capabilities in solar project development, EPC (engineering, procurement, construction), and solar power plant monitoring, operation and maintenance on a global scale.
S.A.G.'s wholly owned subsidiary meteocontrol GmbH (meteocontrol), one of the world's largest solar plant monitoring service providers, provided monitoring services for more than 40,000 solar plants globally with an aggregate capacity of 12.4GW as of 31 December 2015 and generated revenues of RMB105.0 million in 2015.
Production and Sales of LED Products
The Group completed the acquisition of 59% equity interest in Lattice Power Corporation, a leader in GaN-on Silicon LED technology in August 2015. From August to December 2015, the Group generated RMB 146.0 million from the LED business.
Source: PR Newswire
ENF Profiles For Companies Mentioned in This Article