The Singulus Technologies AG reports sales of 83.7 million for the business year 2015 (previous year: €66.8 million). This corresponds to a rise in sales of 25.3 % compared with the level achieved in 2014. The increase mainly results from higher sales from two major orders in the Solar division. In the Optical Disc and Semiconductor divisions sales declined.
- Sales in 2015 at €83.7 million
- Earnings before interest and taxes at €-34.5 million
- Order intake amounts to €96.3 million
- Sales forecast for 2016 between €115 and 130 million
- Implementation of the approved restructuring
The order intake came to €96.3 million overall in the year under review (previous year: €60.6 million), which was above the previous year's level once again. In particular orders in the Solar segment at the beginning of the business year 2015 led to a rise in a year-over-year comparison. The order backlog as of December 31, 2015 remained at €26.6 million (previous year: €14.0 million).
The earnings before interest and taxes (EBIT) amounted to €-34.5 million (previous year: €-49.1 million). Excluding the write-offs and restructuring charges an EBIT in the amount of €-18.2 million (previous year: €-27.8 million) was realized. The financial result was negative at €-8.8 million (previous year: €-2.6 million). The net result in the business year 2015 amounted to €-43.4 million (previous year: €-51.6 million). Excluding the write-off and restructuring charges an adjusted net result in the amount of €-27.1 million (previous year: €-30.3 million) was realized.
The write-off and restructuring charges mainly include the revaluation of the business activities in the Optical Disc segment (€9.2 million). In this connection, in particular expenses reflected the adjustments of inventories. Furthermore, legal and advisory expenses in connection with the restructuring of the bond as well as expenses in connection with the extraordinary write-offs of capitalized development expenses were incurred.
The Group had liquidity in the amount of €19.0 million as of December 31, 2015.
Economic development and financial restructuring
Following the sustained losses and the consumption of equity pursuant to HGB as well as to IFRS, the Executive Board started to draw up a restructuring concept for the refinancing of the corporate bond in 2015. Essentially, the restructuring concept provides for a capital reduction with a ratio of 160 : 1, the exchange of the bonds into new shares of the company as well as new bonds of a newly issued, secured bond and a subsequent implementation of a cash capital increase.
On February 15, 2016, in the course of the bondholder meeting the bondholders of the corporate bond and on February 16, 2016 the shareholders in the course of an extraordinary general meeting approved the proposals of the company’s Boards with more than 90 % of the respective votes present.
The competent District Court received an action in recession against the resolutions of the noteholder meeting. Furthermore the competent District Court Nürnberg received an action in recession against the resolutions of the extraordinary general meeting. However, the company is confident that these legal actions will be dismissed through a release process and that the implementation of the restructuring concept will commence afterwards.
Outlook for the Business Year 2016
For the current business year SINGULUS TECHNOLOGIES projects sales in a range of €115 to 130 million. Despite the higher sales compared with the previous year, the company still expects a negative operating result (EBIT) for 2016 in the range of €-2.0 to -6.0 million and a balanced to slightly positive EBITDA.
The forecast for the full-year targets for 2016 is mainly based on the assumptions that the Solar market will continue to perform favourably, the extensive orders for production machines for thin-film solar modules in discussion are realized and that additional orders in the area of wet-chemical machines are received during the first half of the business year 2016. 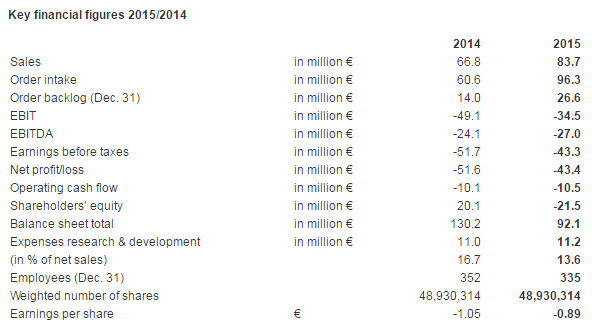