ReneSola Ltd announced its unaudited financial results for the third quarter ended September 30, 2018.
Mr. Xianshou Li, ReneSola's Chief Executive Officer, commented, "We delivered another quarter of solid performance, as the effort to execute on ReneSola's transformation over the past twelve months continued to yield results. Revenue was once again at the high end of our expectations, and we meaningfully improved both gross and operating margins. Net income for the third quarter grew significantly, despite the sequential revenue decline of more than 30%, as anticipated. These strong results reflect our accelerating business momentum and improving earnings power."
Li continued, "Our overall solar power project pipeline remains solid at around 1.5GW, and we continue to be optimistic about our opportunities around the world. We believe that our talented team, diversified geographic coverage and track record of success at every stage of project development positions us for profitable growth in the years ahead."
Third Quarter 2018 Highlights 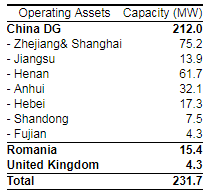 As of September 30, 2018, the Company had 14.0MW of completed projects, which are currently for sale. 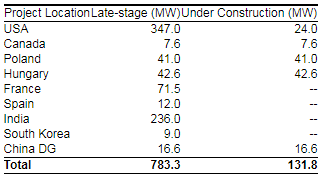 United States
In the U.S, the Company has a late-stage pipeline of 347.0MW, 24.0MW of which are under construction and expected to be connected to the grid in the fourth quarter of 2018.

Canada
In Canada, the Company has a late-stage pipeline of 7.6MW projects, all under construction and expected to be connected to the grid by the end of 2018. All 7.6MW of projects are eligible for Canada's FiT3 Scheme.

Poland
In Poland, the Company has a late-stage pipeline of 41.0MW, which are all under construction. This pipeline is included in the package of projects intended to be sold to Chroma Investment.

Hungary
In Hungary, the Company grew its late-stage pipeline to 71 "Micro PPs" projects with a total capacity of 42.6MW, all of which are under construction.

France
In France, the Company formed a strategic partnership with Green City Energy to jointly develop four solar parks with a total installed capacity of 69.0MW. Additionally, the Company was awarded solar projects in France with a combined capacity of 2.5MW in the last tender.

India
In India, the Company has a pipeline of 236.0MW, which are self-consumption or open access projects with top-rated commercial and industrial off-takers.

Outlook
For the fourth quarter of 2018, the Company's project business is expected to generate revenue in the range of $20 to $30 million and overall gross margin in the range of 20% to 25%.
Adoption of New Accounting Policy
Effective from January 1, 2018, ReneSola adopted the new revenue recognition policy, ASC 606 — Revenue from Contracts with Customers, using the modified retrospective method in accordance with US GAAP ("ASC 606"). As a result of adopting ASC 606, the Company recognized the cumulative effect of initially applying the revenue standard as an increase of approximately USD 0.9 million to the opening balances of retained earnings in the first quarter of 2018. There was no adjustment in the third quarter of 2018.
Source: ReneSola
ENF Profiles For Companies Mentioned in This Article