Etrion Corporation announces the signing, execution and drawdown with respect to a finance agreement for the construction of the 45MW Niigata solar project located in the Niigata prefecture in northern Japan. The arranger of the Etrion Green Project Bond was Goldman Sachs Japan Co., Ltd.
Marco A. Northland, Etrion's Chief Executive Officer, commented: "I am very pleased to announce the financing of our Niigata 45MW project. With the addition of Niigata, we will be nearly doubling our capacity in Japan to over 100MWs. The financing was executed flawlessly, securing a green bond at a financing cost less than a half the cost of prior projects."
Key Project Metrics 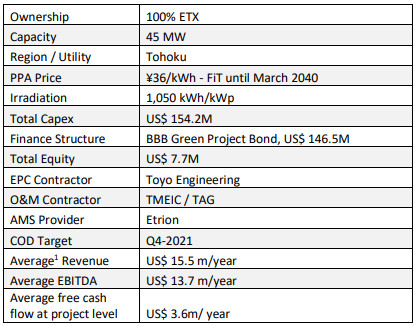 Niigata is a 45MW ground-mounted fixed-tilt solar photovoltaic power project to be built on one site in the Niigata prefecture of Japan. Construction-related works began yesterday, and the solar project is expected to be fully operational by the fourth quarter of 2021. The solar power plant will be built on 75.7 hectares of owned land and will connect through the Tohoku Electric Power Co., Inc. utility. The project company entered into an effective eighteen-year power PPA with Tohoku and will receive ¥36 per kWh of electricity produced (approximately US$0.33 per kWh). Once operational, Niigata is expected to produce approximately 47GWh of solar electricity per year, enough to supply more than 13,000 Japanese households. In addition, the project is expected to generate average annual revenues from sale of electricity of US$15.5 million, EBITDA of US$13.7 million and free cash flow at project level of US$3.6 million.
Etrion owns 100% of the Niigata project. The total project cost is expected to be approximately JPY 16.7 billion (US$ 154.2 million) including VAT, which has been financed 95% through a non-recourse loan with a tenor of construction period plus 16.8 years. The remaining 5% of total project cost has been fully funded by Etrion. The all-in non-recourse project loan interest rate is 1.2%. The lender to the Niigata project is a Green Project Bond Trust fully underwritten by the arranger Goldman Sachs and sold to other investors.
Source: Etrion Corporation
ENF Profiles For Companies Mentioned in This Article