REC Group announces that the fourth generation of its multiple award-winning REC TwinPeak solar panel has received CERTISOLIS certification for low carbon footprint (LCF). This officially qualifies the REC TwinPeak 4 for public sector tenders and rooftop installations between 100 and 500 kWp in France, which offers REC Certified Solar Professionals even better opportunities to gain business in the French solar market.
The latest-generation of the popular REC TwinPeak solar panel is now CERTISOLIS-certified for CRE4 and PPE2 tenders as well as for rooftop installations between 100 and 500 kWp in France. 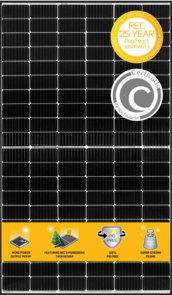 Significantly lower carbon footprint for a cleaner industry
The French Energy Regulatory Commission (CRE) requires all solar panels to have a carbon footprint certificate from CERTISOLIS in order to bid for projects in the latest round of renewable energy tenders under France's multi-year energy procurement program PPE2. To gain eligibility for rooftop installations between 100 and 500 kWp and for PPE2 tenders, solar panels need to have a carbon footprint value below 550 kg of CO2-eq per kWp.
With around 450 kg of CO2-eq per kWp, the REC TwinPeak 4 easily meets the eligibility conditions. Reinhard Lampe, Vice President Sales and Marketing REC Solar EMEA, "For 25 years, REC has been committed to pioneering solar technology with high efficiencies in order to drive the global energy transitions. With the PV industry growing in importance to fight climate change, we take our responsibility for sustainable innovations even more seriously. With its low carbon footprint, the REC TwinPeak 4 Series is a testament to this and creates greater opportunities for project developers in France with its long-lasting high performance."
Following the launch of the lead-free and RoHS compliant REC Alpha Series in April 2021, the REC TwinPeak 4 solar panel was unveiled just a month later and is now available in Europe. While a consumer's choice to go solar is doing good in general, how much good can vary greatly. If the expected 200GW of installed solar PV panels worldwide in 2022 would have a footprint of 100 kg CO2-eq per kWp less compared to the 550 required like the TwinPeak 4, the industry could save 20 mega tons of CO2-eq – this is the equivalent of shutting down 4.6 coal-fired power plants in the US for one year.
REC TwinPeak 4: new-gen strengths
Improving on the strengths that have made the TwinPeak product family such a success, it offers even better nominal power output, delivering up to 375 watt-peak from its 120 half-cut monocrystalline p-type cells. It also features the pioneering and multiple award-winning Twin
Design. The improved cell structure, multi-busbar connection and the same 30 mm frame and support bars as in other leading REC solar panels enable the TwinPeak 4 to offer best in class performance and to withstand higher loads of +7000 Pa. These benefits in operation, supported by the comprehensive REC ProTrust Warranty package, including a 25-year warranty on the product, performance and labor, make a compelling business case for the REC TwinPeak 4 as the solar panel of choice for rooftop installations and for PPE2 tender projects in France.
REC strongly committed to CSR
As all REC solar panels, the TwinPeak 4 Series is manufactured in REC's highly efficient production site in Singapore using Industry 4.0 practices. The company is continuously driving Energy, Water and Waste Savings programs and is using also solar power on its rooftop to reduce its own environmental footprint. At its manufacturing site in Norway, REC invented a technology to convert kerf, a by-product of the wafer production process, to high-quality solar grade silicon, drastically reducing the carbon footprint. REC is committed to a holistic Corporate Social Responsibility according to the core subjects of ISO 26000. Detailed information available at recgroup.com/csr.
Source: REC
ENF Profiles For Companies Mentioned in This Article