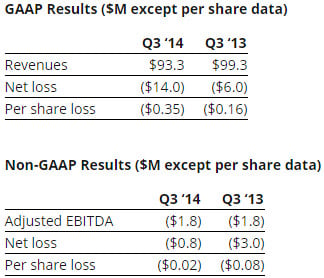 "Veeco reported $93 million in revenues, a slight decline from the second quarter of 2014, as an increase in MOCVD revenue was offset by declines in our other businesses," commented John R. Peeler, Chairman and Chief Executive Officer. "We have been steadily improving Veeco's bottom line performance this year by lowering our operating expenses and driving higher gross margins, resulting in an adjusted EBITDA loss of $2M. We continue to manage our cash well, ending the quarter with a cash balance of $487 million, up $2 million from the prior quarter."
"Third quarter 2014 orders were $107 million, higher than the second quarter of 2014," continued Peeler. "LED & Solar orders totaled $93M, the highest level since the third quarter of 2011, driven by an 8% increase in MOCVD. MBE won several key R&D deals and booked a total of $9 million in the quarter, the highest level this year. We also booked our prototype FAST-ALD system for development of flexible OLED displays at our key customer. With no capacity purchases by hard drive customers, Data Storage orders remained weak at $14M."
Outlook
Veeco's fourth quarter 2014 revenue is currently forecasted to be between $100 and $115 million. Earnings per share is currently forecasted to be a loss of between ($0.25) to ($0.13) on a GAAP basis, and a ($0.03) loss to $0.09 earnings on a non-GAAP basis. Please refer to the attached financial table for more details.
Peeler added, "Veeco's second half 2014 orders are currently expected to be higher than the first half, driven by growth in MOCVD, as LED unit demand and quoting activity remain strong. Veeco is making progress improving bottom line performance through a combination of better business conditions, execution on growth initiatives, and a more streamlined company with lower operating expenses."
Source: Veeco Instruments
ENF Profiles For Companies Mentioned in This Article