Hyundai Heavy Industries (HHI) reported the financial results for its consolidated fourth quarter and full year ended December 31, 2014.
Fourth-Quarter Consolidated Results
Revenues went up 11.6 % from the previous quarter to 13.8641 trillion Korean won (hereinafter referred to as ‘won’) in the fourth quarter of 2014 thanks to increased working days, receipt of change orders from clients and the progress of mega-sized EPC projects in offshore and onshore businesses. However, in year-over-year (YoY) terms, HHI witnessed a slight drop of 6.5 % in revenues as low oil prices hurt the refinery business.
HHI’s operating loss narrowed quarter over quarter (QoQ) to 22.3 billion won from 1.9346 trillion won due to reduced provisions in both HHI and its affiliate companies. Operating loss dropped YoY as well due to provision cutbacks in shipbuilding business and the receipt of change orders worth $208 million in its offshore business.
The company also saw its net loss narrow both QoQ and YoY due to a decline in operating loss and 225.4 billion won in proceeds from selling shares of KCC and others.
Full-Year Consolidated Results
Full-year revenues dropped 3 % to 52.5824 trillion won from 54.1881 trillion won in 2013. Cumulative operating income turned into a deficit of 3.2495 trillion won in 2014 from the previous year’s 802 billion won. The full-year net income dropped to -2.2061 trillion won from 146.3 billion won in 2013. 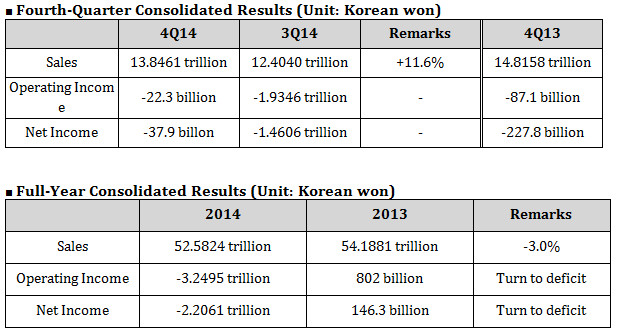