Kyocera Corporation today announced its consolidated financial results for the first quarter of fiscal year 2017 (the three months ended June 30, 2016, or "Q1"), as summarized below. 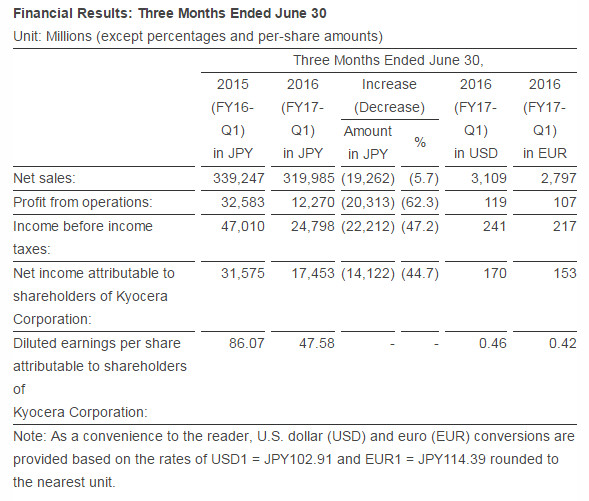 Summary of Consolidated Financial Results
With regard to the principal markets served by Kyocera Corporation and its consolidated subsidiaries (the "Kyocera Group" or "Kyocera"), rising vehicle sales primarily in Asia fueled continued strength in automotive manufacturing during Q1. In contrast, in the information and communications market, component demand slowed due to adjustments in smartphone production. Demand in the Japanese solar energy market also declined due to a reduction in the feed-in tariff benefiting solar power producers. In summary, sales in the Equipment Business remained flat compared with the prior Q1, while sales in the Components Business generally decreased.
On a consolidated basis, net sales decreased 5.7% over the prior period, to JPY319,985 (USD3,109) million; profit from operations decreased 62.3%, to JPY12,270 (USD119) million; income before income taxes decreased 47.2%, to JPY24,798 (USD241) million; and net income attributable to shareholders of Kyocera Corporation decreased 44.7%, to JPY17,453 (USD170) million.
The negative effect of the yen's appreciation against the U.S. dollar and the euro impacted the company's results significantly during Q1. Moreover, lower Q1 profit is explained in part by the absence of profit from the sale of assets in the amount of approximately JPY12 billion (USD117 million) during the prior Q1.
Consolidated Forecasts for the Year Ending March 31, 2017
Q1 demand for core products was largely in line with initial projections. From the second quarter onward, Kyocera forecasts an increase in component demand due to recovery in production of smartphones. Kyocera also forecasts an increase in sales in the solar energy business in both the public and commercial sectors, and growth in sales in the Equipment Business.
As a result, Kyocera's sales and profit forecasts for the fiscal year ending March 31, 2017 remain unchanged from those announced on April 27, 2016. However, in light of recent circumstances, Kyocera has revised its forecast of exchange rates for the second quarter onward. Full-year forecasts of average exchange rates for fiscal 2017 have therefore been revised from JPY110 to the U.S. dollar and JPY120 to the euro as listed below. 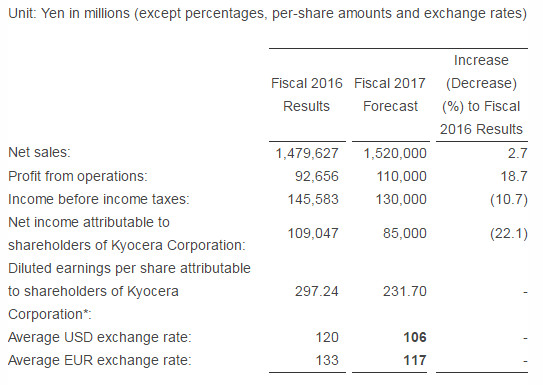 * Forecast of "Diluted earnings per share attributable to shareholders of Kyocera Corporation" is based on the diluted average number of shares outstanding during the three months ended June 30, 2016.
Forward-Looking Statements
Except for historical information contained herein, the matters set forth in this press release are forward-looking statements that involve risks and uncertainties including, but not limited to, product demand, competition, regulatory approvals, the effect of economic conditions and technological difficulties, and other risks detailed in the Company's filings with the U.S. Securities and Exchange Commission.
Source: Kyocera Corporation
ENF Profiles For Companies Mentioned in This Article