First Solar, Inc. today announced financial results for the second quarter of 2016. Net sales were $934 million in the quarter, an increase of $86 million from the prior quarter. The increase was due to higher module only sales, the sale of the Kingbird project and revenue recognition across multiple systems projects, partially offset by lower revenue from the Silver State South and Stateline projects which reached or neared completion in the quarter.
- Net sales of $934 million
- GAAP earnings per share of $0.13
- Non-GAAP earnings per share of $0.87
- Cash and marketable securities of $1.7 billion, net cash of $1.4 billion
- 1.4GWdc bookings year-to-date; 0.8GWdc of new bookings
The Company reported second quarter earnings per share of $0.13, compared to $1.66 in the prior quarter. The second quarter was impacted by pre-tax restructuring charges of $86 million related primarily to the previously announced decision to end production of the TetraSun crystalline silicon product. Non-GAAP earnings per share, adjusted for TetraSun related charges, were $0.87. Net income was also lower versus the prior quarter due to the mix of systems projects sold and under construction and a gain on the sale of certain restricted investments in the first quarter. In addition, results for the second quarter excluded approximately $20 million of profit on the Kingbird sale, which was not recognized in earnings during the period.
Cash and marketable securities at the end of the second quarter decreased to $1.7 billion. Cash flows used in operations were $75 million in the second quarter.
"Our operational execution in 2016 continues to be strong and resulted in another quarter of solid financial results," said Mark Widmar, CEO of First Solar. "Our lead line module efficiency exited the quarter at over 16.6%, and we further lowered our module cost per watt. We sold our Kingbird project in Q2, and our steady execution across our portfolio of systems projects resulted in significant cost reductions. With our recent decision to reallocate capacity to focus on our Series 5 assembly capabilities we continue to position the Company for future success."
The Company updated its 2016 earnings per share guidance and updated other forecasted items as follows: 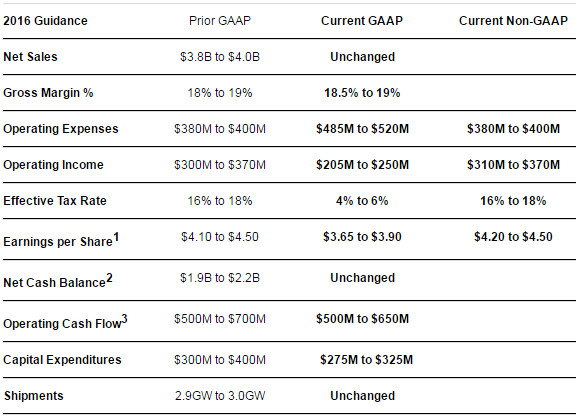